Healthcare has been squarely in the spotlight since the beginning of the COVID pandemic in February 2020, and rightly so.  While the world may have yet to agree upon an answer for how to properly address or prevent a pandemic, the past 18 months have solidified healthcare as an essential sector of the economy, as well as commercial real estate.  In 2019, the US spent 17.7% of GDP on healthcare expenses according to the Centers for Medicare and Medicaid Service (or CMS), which compares to less than 13% in 2000.  We will not get the official numbers from the CMS on 2020 until December 2021, but the pre-COVID projections had healthcare expenditures rising 5.5% to over $4 trillion.  In fact, the CMS projects that healthcare expenses will rise by an average of 5.5% per year through 2028 when expenses will be over $6.2 trillion!

Furthermore, the support of healthcare operators through the CARES Act, forgivable PPP loans, and the American Rescue Plan Act demonstrated the government’s commitment to ensuring the ‘health’ of the healthcare segment.  In short, while cash flows were uncertain temporarily in some segments, most tenants were able to stay current on rent, or at least establish a plan to become current, thus proving the resiliency of healthcare real estate.

As we mentioned in the June 2020 Chilton REIT Outlook titled, ‘Essential REIT Evaluation: Healthcare and Residential,’ the Chilton REIT Composite had exactly 0% allocated to healthcare as recently as April 30, 2020.  This compared to a 10.7% allocation to healthcare in the MSCI US REIT Index (Bloomberg: RMZ) at the time.  However, the significant sell-off in healthcare REITs as if they were not essential combined with our conclusion that healthcare real estate is essential in the long term provided an excellent risk-adjusted reward.

In our opinion, the stocks could outperform the benchmark in both a scenario of increasing COVID cases as well as on positive vaccine developments.  As a result, the Chilton REIT Composite has an allocation of 10.4% to healthcare REITs as of August 31, 2021, which compares to the RMZ healthcare allocation of 10.5%.  In fact, in the year to date period ending August 31, 2021, the healthcare sector has been the largest driver of alpha for the Chilton REIT Composite, including positive contributions from allocation and stock selection.

We believe healthcare REITs still offer an attractive risk-adjusted reward, though the sector is comprised of four main subsectors where the opportunity varies.  In general, we are positive on senior housing due to strong earnings momentum and multiple levers for cash flow growth, and on medical office due to its discounted valuation.  We are becoming constructive on skilled nursing due to a recent pullback. 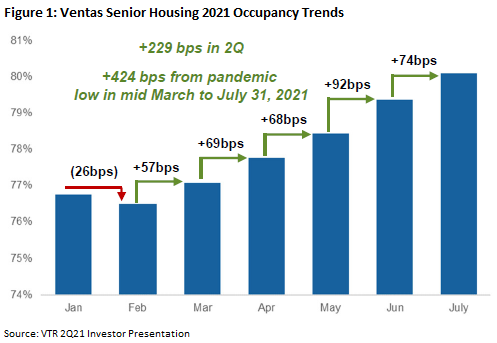 First, there was a slowing of the decline in occupancy that occurred in September 2020, which signaled that the bottom for occupancy was getting closer.  Second, VTR actually showed an increase in occupancy in October, which was a positive surprise to most, though was a bit of a head-fake as November had another occupancy decline.  However, the third and most significant development was the vaccine announcement from Pfizer on November 9, 2020, and the plan to vaccinate the elderly first.  This gave investors comfort that current residents could see a path to normalcy, and even open the door to new move-ins.  February 2021 proved to be the bottom for occupancy for WELL and VTR, and every month since then has seen occupancy gains, as shown in Figure 1.

Separately, though related, the massive decline in occupancy combined with the increase in construction costs made new construction uneconomical in most geographical areas.  One of the main concerns we had about senior housing before COVID was the elevated supply, which we believed would pressure occupancy and rent, in spite of the favorable long term demographics.  Ultimately, new starts of senior housing fell 77% from the peak in 4Q17 to 1Q21 (Figure 2), which meant that current landlords would have better pricing power for longer. 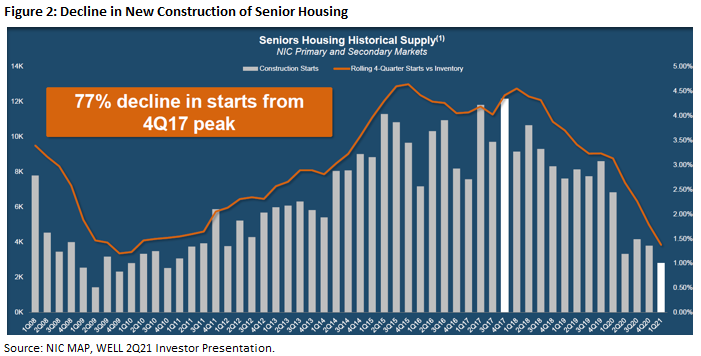 While VTR and WELL are trading at 11.3% and 2.6% discounts to their pre-COVID 2020 peak prices, respectively, we believe the fundamentals remain attractive in the near term.  Demand is only increasing due to the ‘Silver Tsunami’, which describes the disproportionately large increase in 80+ year olds that is set to occur over the next 10 years.  Specifically, the Organization for Economic Co-Operation and Development expects the number of 80+ year olds to increase from 13 million in 2020 to almost 20 million by 2030, an increase of 4.5% per year (Figure 3).

Finally, we believe the market is not giving enough credit to the ‘x-factor’ of acquisitions that could add significant value in the near term.  VTR has announced $2.3 billion of senior housing acquisitions in 2021, and WELL has announced $3.2 billion.  The higher stock prices of WELL and VTR have enabled these acquisitions to be accretive to cash flow per share in year one, and also provide the ramp of net operating income from higher occupancy and rent growth.  For example, WELL’s 2Q21 occupancy of 74.6% compares to pre-COVID occupancy of 87.3% and 2015 peak occupancy of 91.2%.  In terms of acquisitions, VTR recently announced the acquisition of New Senior Residential (NYSE: SNR) for $2.3 billion and expects it to be accretive by $0.10 per share.  At a 17.5x multiple on FFO (or funds from operations) as of August 31, VTR should create approximately $1.75 per share of value immediately (3.2% of the August 31 share price), which will grow significantly over the near term. 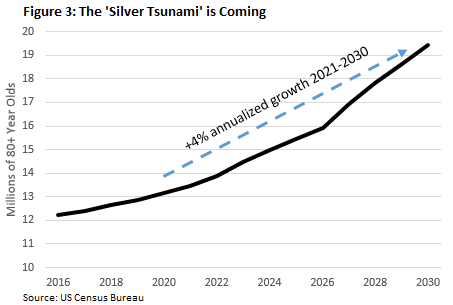 Within the healthcare segment, and among all REITs, the medical office building (or MOB) REITs (Healthcare Realty (NYSE: HR) and Healthcare Trust of America (NYSE: HTA)) were some of the best performers at the outset of the pandemic.  Their high occupancy, long term leases, and essential nature made their drop in rent seem miniscule compared to other segments.  In fact, HR and HTA produced average same store net operating income (or SSNOI) growth of +1.6% in 2020, which compared to average senior housing SSNOI growth of -26.6% (average of VTR and WELL).

However, with the announcement of the vaccine and the investor rotation into ‘reopening’ trades showing higher near-term growth going forward (though off of a lower base), the MOB REITs have been left behind.  Since June 16, 2020, HR and HTA produced an average total return of +4.6% though August 31, 2021, which compares to the BBREHLTH and RMZ index total returns of +28.9% and +39.1%, respectively.  At the same time, transactions in the private market for MOBs have proven that valuations have increased for MOB portfolios, as investors have been attracted to the now-proven durable income streams.

We believe that public investors are not giving the MOB REITs credit for the increase in private values merely because they don’t see a catalyst to close the valuation gap.  Instead, they are giving premiums in other segments, which signals a green light for acquisitions.  We believe that the MOB REITs need to continue to make acquisitions and prove to investors that they can source deals that will be accretive to cash flow per share.  Eventually, investors will award them a premium, enabling the companies to raise capital to consolidate the sector.  If not, private capital may take advantage of the arbitrage, taking one or more of them private.

In contrast to senior housing which is in the recovery phase, skilled nursing is still struggling.  Luckily, the operators are being supported by the government.  Thus, tenant health is not a concern at the moment, as shown by the higher rent coverage ratios in Figure 4.  However, there is the potential for the need for rent cuts when the support is cutoff and the tenants have stabilized.  We believe that is more than priced into the current stock prices of Omega Healthcare (NYSE: OHI) and Sabra Healthcare (NYSE: SBRA).  In addition, these companies have significant exposure to senior housing, which is appears to be undervalued due to the presence within a ‘skilled-nursing’ REIT. 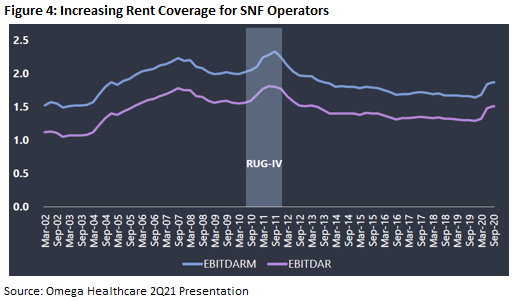 Skilled nursing facilities are where people with more acute illnesses go after the senior housing facilities are no longer able to care for them.  They are heavily dependent upon Medicare and Medicaid reimbursements (approximately 80% of revenues are from government reimbursements), which are determined by the CMS annually.  Historically, the reimbursement increases have not been able to keep up with expense growth, which has necessitated that landlords endure rent cuts for the operators to remain profitable.  However, the government backstop applied during the pandemic has reassured us of the ‘essentialness’ of the skilled nursing sector, thereby creating an implied backstop for these operators and thus the real estate for the foreseeable future.  In addition, the CMS adopted a new model in 2019 called the Patient Driven Pay Model (or PDPM), which potentially increased reimbursements for 2020, though the 2020 data has not been released as of this publication.

We believe that will only enhance the desirability of such assets, leaving room for the compression of the yields on these stocks (8.1% for OHI and 7.5% for SBRA) toward the BBREHLTH and RMZ yields of 4.0% and 2.8% respectively.  Of note, the average payout ratio for these high skilled nursing yields is only 83% of AFFO (or Adjusted Funds from Operations), implying the dividends are extremely safe in the near term.

Though there is only one pure-play life science REIT, we are invested in life science through VTR, which derived approximately 10% of 2Q21 NOI from life science buildings.  The company has partnered with several major universities to develop lab space, so we expect this segment to grow in the future.  The secret is out on life science, as its strong SSNOI growth and healthy profit margins from new development have brought in many new investors, driving down cap rates for this competitive property type.  While we are confident that VTR will create value through development of life science properties, we believe that its contribution to cash flow per share will be somewhat neutral given the low yields.  As an example of the low yields, pure-play life science REIT Alexandria Real Estate Equities (NYSE: ARE) trades at a 38x 2022 AFFO multiple as of August 31, 2021, which compares to the healthcare and REIT averages of 21x.

As mentioned earlier, the Chilton REIT Composite has a slight underweight to the healthcare sector, but we continue to be constructive.  Within subsectors, we are overweight to senior housing and medical office, and underweight to life science and skilled nursing facilities.  We believe the risks of a selloff due to the Delta variant of COVID are real, but likely would only be a pullback before continuing its upward trend.  The 65+ age group of the population is the most vaccinated, and the upcoming ability to have a booster shot should give further confidence to families to continue to utilize senior housing, skilled nursing, and medical office buildings.

As mentioned earlier, the other risk on our radar is new supply of senior housing.  Increases in rent and occupancy could re-ignite enthusiasm for development of new communities, which could dampen our outlook for organic growth.  However, we believe this risk is mitigated by increasing construction costs and the ability to purchase properties below replacement cost.

Previous editions of the Chilton Capital REIT Outlook are available at www.chiltoncapital.com/category/library/reit-outlook/.

An investment cannot be made directly in an index. The funds consist of securities which vary significantly from those in the benchmark indexes listed above and performance calculation methods may not be entirely comparable. Accordingly, comparing results shown to those of such indexes may be of limited use.

The information contained herein should be considered to be current only as of the date indicated, and we do not undertake any obligation to update the information contained herein in light of later circumstances or events. This publication may contain forward looking statements and projections that are based on the current beliefs and assumptions of Chilton Capital Management and on information currently available that we believe to be reasonable, however, such statements necessarily involve risks, uncertainties and assumptions, and prospective investors may not put undue reliance on any of these statements. This communication is provided for informational purposes only and does not constitute an offer or a solicitation to buy, hold, or sell an interest in any Chilton investment or any other security.

Build confidence in your financial future

We are trusted partners on your journey to financial prosperity.