The top performing sectors in the second quarter were Real Estate, Information Technology, and Energy.  Stocks underperformed the most in the Utilities, Consumer Staples, and Industrials sectors.  Though value stocks continued to outperform growth stocks on a year-to-date basis, Q2 saw a significant rotation back towards growth names as interest rates fell despite the robust near-term economic growth outlook.  Similarly, performance of small and mid-cap stocks remained ahead of large cap stocks for the first six months of 2021. Large cap stocks did lead on a relative basis in the second quarter as investors sought exposure to more mature companies that had not yet fully participated in 2021 market gains.

Estimates for gross domestic product (GDP) and earnings growth have risen consistently throughout 2021, driven by a combination of what appears to be a rapidly fading pandemic, strong government support, and pent up demand for goods and services.  Recently, the Federal Reserve increased its estimate for 2021 US real GDP growth to 7.0%, up from 6.5% in March and 4.2% last December.  Not surprisingly, estimates for S&P 500 earnings have moved up sharply since December for both this year (up 14%, shown in orange on the chart below) and next year (up 9%, shown in orange), justifiably driving markets to new all-time highs. 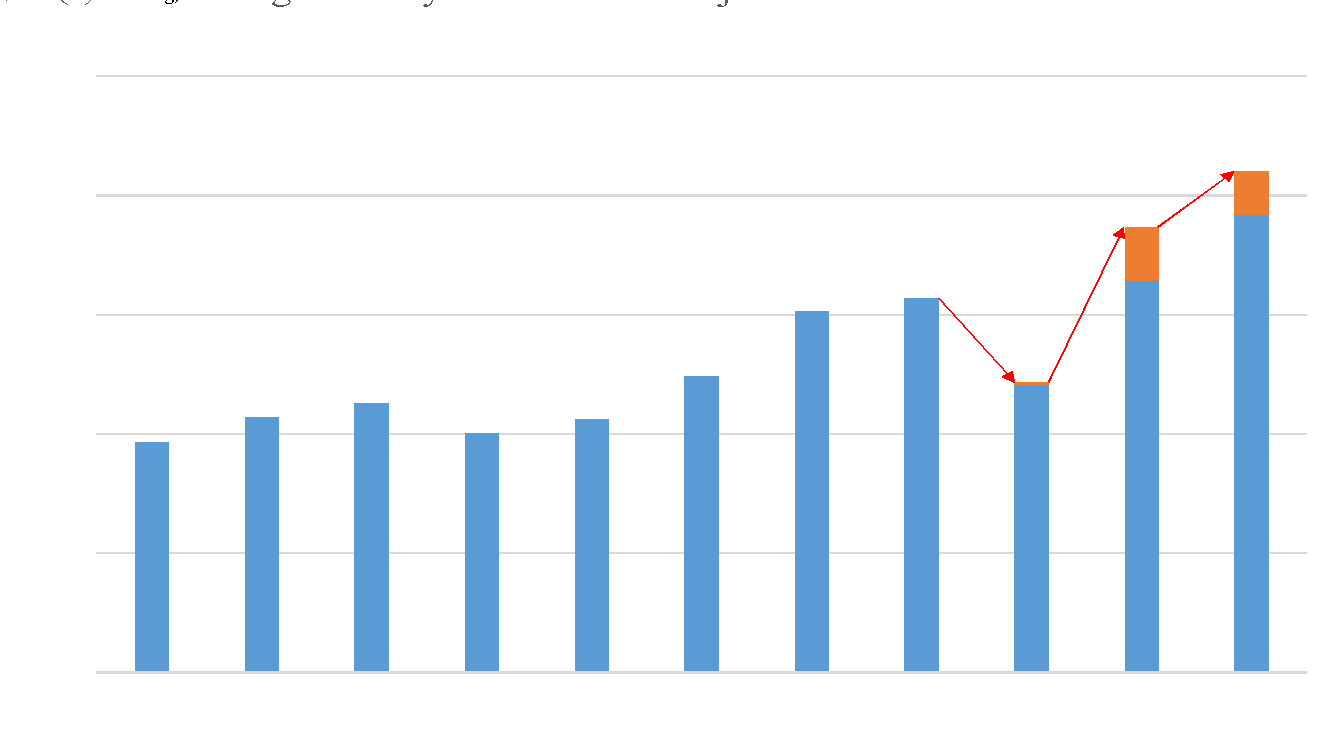 Recent earnings reports have been remarkably strong for a wide range of companies. Cyclical value names have benefited from economic reopenings, while traditional growth companies have seen business pulled forward and/or gained market share during the pandemic.  Further, visibility for many has improved and expectations for a strong second half of 2021 have been building.

At the same time, however, fears of runaway inflation, which could eventually crimp corporate profits and cause the Federal Reserve to put brakes on the economy, arose for market participants in the second quarter.  Stretched supply chains, increasing labor costs, soaring commodity prices, and shortages of key components like automobile semiconductors are challenging many companies.  This is not terribly surprising considering the current pace of economic growth.  The Federal Reserve now expects its favored inflation measure, Core Personal Consumption Expenditures (PCE), to rise 3.4% in 2021, exceeding its long term 2% goal, before cooling off to 2.1% in 2022.

With strong top-line results and margin-enhancing initiatives taking hold, many companies, especially those with pricing power and a strong competitive position (which we favor), will navigate the environment just fine.  Further, much of the recent spike in inflation is transitory due to base effects versus the pandemic-induced drop-off in the economy last year.  We expect an eventual loosening of tight conditions as supply / demand imbalances revert to a more normal equilibrium.

A great example is lumber prices. Earlier in the quarter, a historically strong housing market, hoarding by users of lumber, COVID-related shutdowns, and diminished sawmill capacity (following the housing bust of 2008-9) pushed lumber prices to a closing peak of $1,686 per thousand board feet.  Since then, selling of stockpiles and added supply have recently pulled lumber prices down by over 50% to the (still elevated) current level near $716.

Following passage of the $1.9 trillion American Rescue Plan to address COVID-19 in March, the Biden administration is seeking a massive $4.1 trillion infrastructure spending plan ($2.3 trillion American Jobs Plan and $1.8 trillion American Families Plan).  However, bipartisan negotiations on what specifically should be included (roads, broadband, preschool, community college, etc.), and how to pay for it, have been contentious.  The likely end result is a significantly scaled-down plan, funded by less aggressive tax increases on individuals and corporations as well as more aggressive tax enforcement.

Though only a year old, the current post-shutdown recovery has been vigorous.  2021 GDP growth is expected to reach a level not seen since 1984, interest rates will likely remain relatively low due to a supportive Federal Reserve, and the credit environment should be conducive to solid growth for a few more years.  Various market indicators suggest that we are in the middle stage of an economic cycle, which argues for portfolios with balanced exposures to cyclicality, growth vs. value, etc.  Companies with pricing power, a strong competitive advantage, and/or secular tailwinds are particularly attractive in this stage of the cycle.

Despite the continuation of positive earnings revisions, significant further near-term market gains continue to seem unlikely, and seasonal headwinds could cause some short-term weakness.  So, we are currently putting cash to work opportunistically as attractive individual names pull back.  Though a resurgence of COVID-19 is still a concern, the major risk to watch now is inflation and potentially premature Fed rate hikes, which could choke off the economic recovery.  Further, though some expectations for additional infrastructure spending and higher taxes have been incorporated into forecasts, any major surprises on those fronts could move markets.

The decline in interest rates during the quarter helped bond prices partially rebound.  The Bloomberg Barclays Aggregate Index, a mix of government and corporate bonds, rose 1.8% during the quarter.  Year-to-date, the index is still lower with a total return of    -1.6%.  10-year Treasuries, which yielded just 0.93% at year-end, jumped to 1.74% at the end of Q1, and then fell back to 1.45% at quarter-end.  Since the majority of our corporate bond holdings carry shorter maturities, our securities continue to show positive total returns year-to-date (short-term bonds are less interest rate sensitive than longer-term bonds).  Short-term rates remain exceedingly low, with yields of less than 0.10% for maturities of one year or less.

One of the catalysts for lower longer-term interest rates during the quarter was the increasingly “hawkish” Federal Reserve commentary following its recent meeting.  Prior to this meeting, most Fed voting members believed that short-term interest rates would not need to be raised until 2024.  However, in light of some materially higher inflation readings and a stronger than expected economic recovery, more Fed members now feel that short-term interest rates may need to move higher in 2023, if not sooner.  While many different factors impact the direction of longer-term rates, growth expectations are a key input (higher growth expectations generally lead to higher long-term interest rates).  Thus, somewhat counterintuitively, with the timeline for pushing up short-term rates potentially being accelerated (to slow down inflation and choke off the potential for an overheated economy), longer-term rates fell modestly following the Fed meeting.

We believe the Fed is still a number of quarters away from actually raising rates.  While the Fed does have a “dual mandate” to maximize employment and control inflation, the priority in this recovery is employment.  Significant progress has been made, but the US is still nearly 7 million private sector jobs shy of reaching pre-pandemic employment levels.  The Fed remains comfortable letting inflation moderately exceed 2% for some time, especially since many Fed members are of the opinion that significant components of the recently elevated inflation readings are transitory in nature.

We generally remain on the sidelines when it comes to purchasing new corporate bonds.  Prices remain elevated (and thus, yields remain exceptionally low), especially for short-term investment grade bonds.  We plan to use any material volatility-related price disruptions to deploy cash within client fixed income allocations.  The majority of our fixed income allocations remain comprised of short dated investment-grade corporate bonds, which we intend to hold until maturity.  While the total return potential for these securities is limited, fixed income continues to play the important role of providing both income and relative stability within a larger diversified portfolio.

Global equity markets also continued to rally in Q2, buoyed by the further rollout of COVID-19 vaccines and the tailwind of worldwide economic stimulus.  As has typically been the case in recent years, US large cap led the way with an 8.5% return, followed by international developed markets at 5.4%, emerging markets at 5.1%, and US small cap at 4.3%.  Similar to our view that the Federal Reserve will not raise interest rates for quite some time here in the United States, we also believe global central banks will remain exceptionally accommodative in the near future.  Generationally low interest rates are supportive of higher levels of equity valuation and are a key reason we continue to favor equities over fixed income. 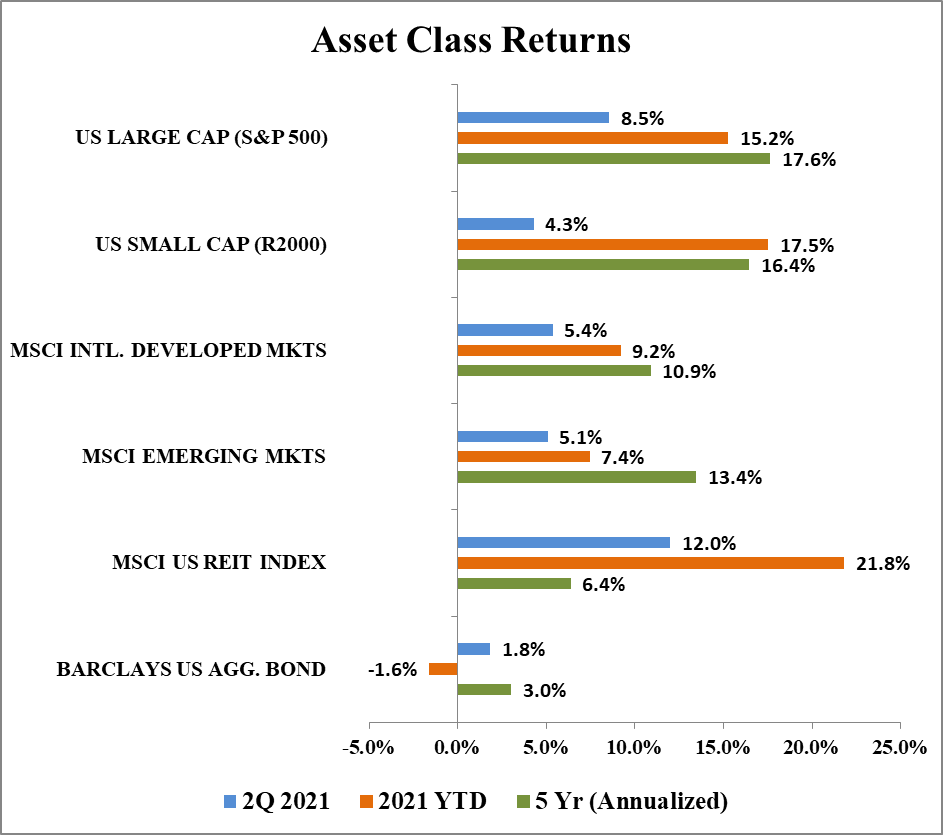 As has been the case for some time, non-US equities have several tailwinds at their back that could position them to outperform their US counterparts.  First, international valuations, as measured by forward price-to-earnings ratios, remain near multi-year lows relative to the S&P 500.  Likewise, international dividend yields are materially higher than those in the US.  In a world starved for yield, we could see some asset class rotation into these regions to boost investor dividends.  Importantly, the prospect for international earnings growth over the next several quarters is actually higher than in the US.  Most of the countries outside the US are well behind the vaccination curve and can be classified as being in the “early innings” of recovery.  Moreover, international stock indices contain a higher proportion of early-cycle sectors.

This doesn’t guarantee that international markets will outperform US markets moving forward, but asset class leadership does tend to rotate.  Recent REIT performance is a good example of an asset class showing significant outperformance after experiencing a period of underperformance relative to the S&P 500.  As shown in the asset class return chart, while REIT returns lagged in recent years, year-to-date returns have been materially above the rest of the index (the same can be said for US small-cap stocks).  It would not surprise us to see international markets also begin to outperform.

With the S&P 500 sitting near an all-time high, now is a good time to consult with your wealth advisor to review your financial plan.  Diversification across asset classes and geographies could make sense depending upon your risk tolerance and long-term financial goals.  While we remain bullish longer-term on both US and international equity markets, pullbacks will occur and such instances may not be the ideal time for significant allocation changes.

Real estate reacts to inflation in the opposite way from most financial assets.  Accordingly, it plays an important hedging role in many investment portfolios.  At the heart of this argument is the rate of change in the replacement costs of buildings.  In the chart on the next page, we plot the historical relationship between construction costs (comprised of labor and materials) and inflation.  Because construction costs have outpaced inflation, the replacement costs of buildings has increased more than the costs of other goods.  We believe that rents should follow replacement costs, as buildings would only be built if rents justified construction.  History has shown that rents will eventually rise in an inflationary environment assuming markets are at or near equilibrium between supply and demand.  Such is the case today for the vast majority of commercial real estate as we expect a rapid recovery as the economy re-opens and government stimulus is recognized. 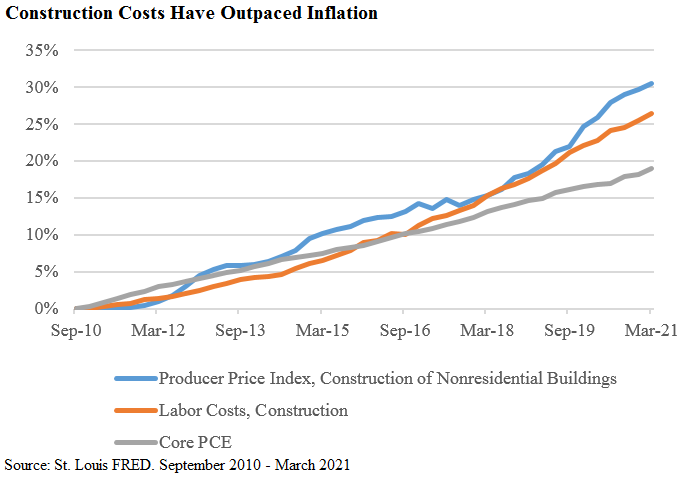 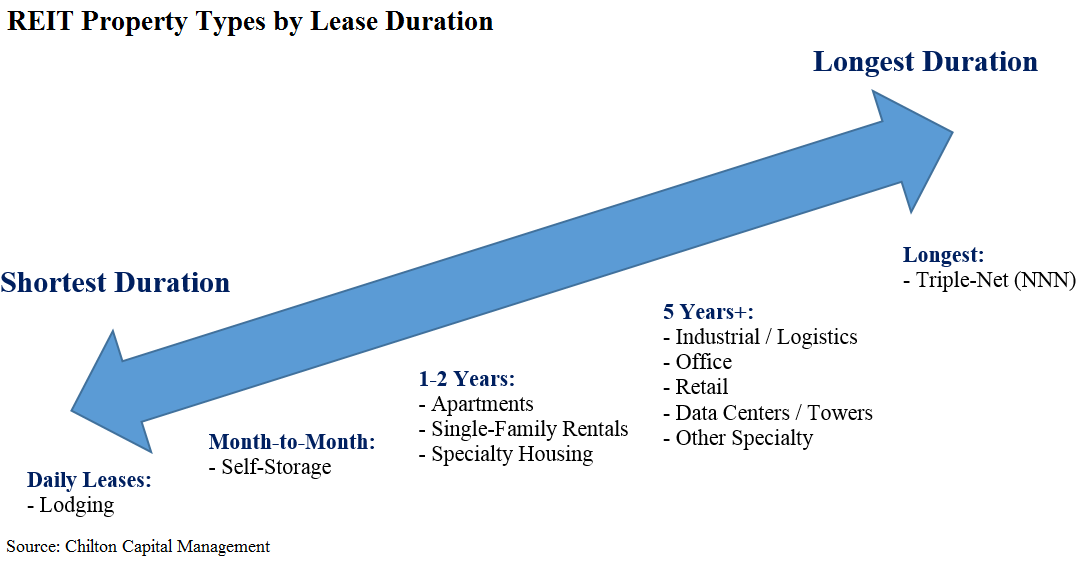 We believe a balanced approach is appropriate, as some of the most inflation-sensitive property types are already reflecting valuations that incorporate higher inflation than we are anticipating.  That being said, REITs as a whole remain attractive relative to other asset classes given a low 10-year US Treasury yield, narrow credit spreads, and an above average P/E multiple on the S&P 500.

Build confidence in your financial future

We are trusted partners on your journey to financial prosperity.